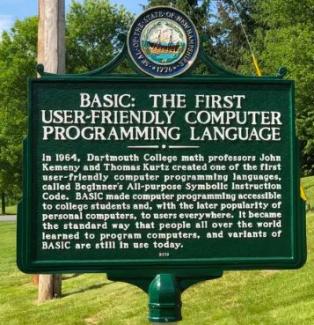 The BASIC programming language may not exactly be flavour of the month in 2019, but it holds a special place in the history of coding. While the first version dates back to 1964 it lives on today in one form of another - most notably Visual Basic (VB), which still drives Sage300 ‘classic’ screens.

BASIC also holds a special place in the memory of many Baby Boomers who, like me, cut their coding teeth on it.

Now, 55 years after its inception, the US state of New Hampshire has recognized BASIC in a special way, by erecting an ‘historical marker’ on Route 120.

The slow-turning wheels of bureaucracy were set in motion by local writer and self-confessed ‘geek’ David Brooks. In August 2018 he published a Granite Geek blog article bemoaning the fact that, while New Hampshire had 255 highway historical markers celebrating bridges and the like, there was “distressingly little celebration of New Hampshire’s technical and scientific accomplishments.” In short:

What you won’t find is much geekiness.

Geeks need feel neglected no more. As David Brooks stated in his recent Concord Monitor article announcing the installation of the monument:

Everybody who has ever typed a GOTO command can feel proud.

David Lacey is Communications Manager at Orchid Systems, but one of his past lives was in the IT industry. He spent most of the 1980s developing banking and treasury applications in BASIC on DEC PDP computers. You can find out more about David and other Orchid staff members at the bottom of our About Us page. 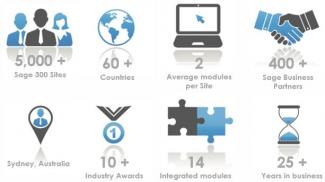 Orchid by the Numbers

As we pass the halfway mark of our 26th year, we’ve crunched a few numbers. These 13 bullet points say a lot about Orchid Systems: Who we are, what we do, where we do it, and how we do it.
Read More