January Serves It Up

It's not the United Nations, it's the Australian Open, but all these flags remind us that the world is increasingly connected and complex.

The end of January saw much of North America frozen solid courtesy of the Polar Vortex. The US Government had been equally frozen for the entire month before a late thaw, if only a temporary one.

At the same time, Sydney was sweltering through a 40C day. That was just an exclamation mark to end Australia’s hottest month on record, following directly on from our hottest December on record. Meanwhile, Townsville in North Queensland is being devastated by record-shattering rainfall and flooding, and large areas of Tasmania’s world-heritage wilderness are ablaze.

With all that happening you might say February couldn’t come soon enough, but January wasn’t all bad.

January down under also means the Australian Open tennis, and the 2019 edition didn’t disappoint. Let's take our annual recap.

A metaphor for global power shifts?

The image above shows the quarterfinal line-ups from the men’s and women’s singles draws. 16 players, 11 nations, 9 currencies.

That collection of flags wouldn’t look out of place outside the United Nations HQ, so with that in mind let’s take a closer look at the power dynamics.

This time last year we were celebrating Roger Federer’s title defence, and I justified my 2018 Australian Open blog by drawing some pretty tenuous parallels between Roger’s and Orchid’s last 25 years. His 2019 attempt at a three-peat was derailed by the very impressive 20-year-old Greek, Stefanos Tistsipas, so this year I’ll need to find another angle.

All those national flags above could also be a metaphor for the globalized economy. Our January article on Supercharging Sage 300 listed many of the ways that Orchid’s products can help manage multiple currencies and deal with international business complexity, so let’s close off by revisiting some of those points:

David Lacey is Communications Manager at Orchid Systems. You can find out more about David and other Orchid staff members at the bottom of our About Us page. 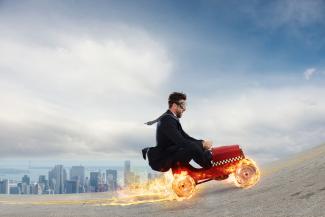 The Sage website describes 5 key benefits of implementing Sage 300cloud. See our suggestions for how you could 'supercharge' those benefits through the addition of Orchid add-ons.
Read More